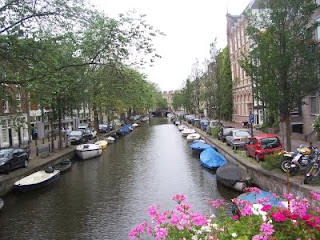 Here is my postcard to you from Amsterdam, as promised. Wish I could move here.
at July 31, 2009 2 comments: Links to this post 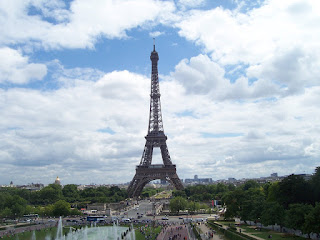 What kind of friend would be if I didn't send you a postcard? Here ya' go. Today I'm off to Giverny to take a peek at Monet's gardens. After that, I'm off to Amsterdam for two days. I hope to send you another postcard when I get there. From there, I go to the philosophy conference for two days at the university of Cologne. Then I'm back to the States on the 30th.

A Review of New Waves in Philosophy of Religion

My favorite song by Merrick. The version from the indie film, The Minus Man, is better though.

Wes Morriston on Genocide and the Old Testament

This paper really needed to be written.

UPDATE: Paul Copan has written a rejoinder to Morriston's paper. It can be found here. A tip of the hat to TKD for the link. I leave it to the reader to decide whether Copan's reply is adequate.
at July 13, 2009 3 comments: Links to this post

Marilyn McCord Adams discusses the problem of evil, and the problem of horrendous evil in particular, on the current podcast episode of Philosophy Bites. Interestingly, she argues that being a theist is a necessary precondition for having rational hope in a good future for humanity, given the persistence and pervasiveness of horrendous moral evil.

Marilyn Adams is a prominent philosopher of religion, along with her husband, Robert Adams. Both recently taught at Oxford, but have since accepted senior offers at the University of North Carolina, Chapel Hill (starting next Fall).
at July 12, 2009 No comments: Links to this post

...is receiving careful exposition and discussion at Prosblogion. Here is the latest installment.

Paul K. Moser is the Chair of the Department of Philosophy at Loyola University (Chicago). His recent book, The Elusive God: Reorienting Religious Epistemology, is a novel and important defense of Christian theism.

Btw, he has another novel defense of Christian theism (The Evidence for God: Religious Knowledge Reexamined) coming out in December. It looks as though he will argue that the evidence for the Christian God is the moral transformation of believers.
at July 11, 2009 1 comment: Links to this post

Conservative Christian Theism and the Argument from Non-Obviousness

Here's an argument I'm toying with. Note: it's very rough -- lots of cleaning up to do, qualifications to make, etc. At this point, I just want to get the basic point on the table and (hopefully) get some feedback.

Apologists who make these sorts of claims are often conservative Christians -- people who believe that, e.g., Paul's epistles are accurately recorded in the New Testament. However, I'm not sure I see how these two views can fit together coherently. For Paul seems to have thought that it's not possible for a normal adult to be a rational non-theist. In fact, he seems to think that such non-belief is only possible by illicitly suppressing the truth about what one knows about God. Here are some of Paul's words in Romans 1: 18-23:

"18The wrath of God is being revealed from heaven against all the godlessness and wickedness of men who suppress the truth by their wickedness, 19since what may be known about God is plain to them, because God has made it plain to them. 20For since the creation of the world God's invisible qualities—his eternal power and divine nature—have been clearly seen, being understood from what has been made, so that men are without excuse."

Thus, from the passage above, it seems that Paul thinks that non-believers suppress the obvious truth about an evident God, and that the obviousness of the existence and nature of God is seen through the Creation. And if that's right, then it seems that the cost of the humble claims apologists make about the evidence for theism is holding a view that entails that Paul was wrong: what Paul says in the epistle to the Romans is false. It seems to me, then, that apologists have a choice: (i) defend the claim that the evidence makes the existence and nature of a theistic God evident, or (ii) reject conservative Christianity.

Start with the first option. Taking this route requires apologists to defend the view that the existence and nature of God can not just be seen, but clearly seen (as Paul says in Romans), such that if some don't believe, then they are illicitly suppressing the truth about God. But that's a tough pill to swallow. For even among the Christian philosophers who think the evidence for theism isn't too shabby, few think the evidence is that strong.

The other alternative is to say that Paul was wrong, and that what he said in Romans is false.[2] But again, that's a hard pill to swallow for a conservative Christian. In fact, that seems to be incompatible with conservative Christianity: at a minimum, they have to reject a doctrine taught by the apostle Paul.

In fact, it appears that one can take the argument further and state it as an argument against conservative Christian theism:

This argument is stronger than the standard argument from divine hiddenness. For the latter is open to the Skeptical Theist reply that for all we know, God has reasons for remaining hidden, and these reasons are beyond our ability to grasp. But on the current argument, the NT seems to leave no room for this, as the NT seems to commit the conservative believer to the thesis that in fact God is not hidden; the evidence for his existence is not only seen, but clearly seen.
--------------------------
[1] Of course, such a view is compatible with the view that the evidence for theism is much stronger than that. However, as I will argue below, conservative Christians are committed to the stronger, latter sort of view qua conservative Christians.
[2] For simplicity's sake, I leave out the disjunct that the New Testament inaccurately reports what Paul said on the matter, as that option also entails that conservative Christian theism is false.
at July 09, 2009 10 comments: Links to this post

I'm going to a Philosophy workshop in Germany in a few weeks. I'll be in Paris from the 24th to the 27th, and Cologne from the 28th to the 29th. Any advice about food, lodging, pubs, etc. would be greatly appreciated. And if you're in the area, I'd be happy to meet up with you for a beer!

Russell's Fantastic Recent Paper on the Problem of Evil

Russell, Bruce.  2018. " The Problem of Evil and Replies to Important Responses ", European Journal for Philosophy of Religion 10...