My New Book With Joshua Rasmussen Is Now Out

Readers of this blog might be interested in my new book with Joshua Rasmussen, Is God the Best Explanation of Things? A Dialogue (Palgrave Macmillan). 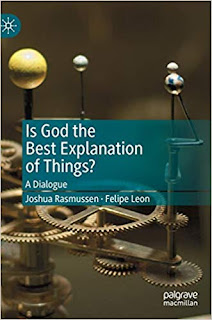 Reviews:
“This is a terrific book. It is bold in its approach, and interesting in its details. Rasmussen and Leon are to be congratulated both for the spirit in which their investigation is conducted and for the contributions that they make to advancing discussion.” (Graham Oppy, Professor of Philosophy, Monash University, Australia)

“The authors of this clear and absorbing volume are intent on saying the best that can presently be said on behalf of theism and naturalism. Energetically, they produce clever arguments for their respective views, many of them new or interestingly refashioned, grounded in the latest relevant results from a wide range of areas. But Leon and Rasmussen have also adopted a more deliberately collaborative and constructive approach than is visible in any similar work. And by this means they succeed in exposing how much more flexible and variously construable are the concepts of theism and naturalism themselves than the history of their discussion would have led one to expect. One almost dares to think that a future agreement on the God question is possible!” (J.L. Schellenberg, Professor of Philosophy, Mount Saint Vincent University, Canada)

“Felipe Leon and Joshua Rasmussen bravely tackle the most profound ontological question we can ask: what is the foundation of existence? Exploring this question in dialogue, they offer a fascinating exchange of ideas regarding such philosophical issues as causation, morality, evolution, the fine-tuning of the universe, consciousness, and the existence of God. I found this to be one of the most engaging, informative, and thought-provoking philosophical dialogues I have ever read.” (Yujin Nagasawa, H. G. Wood Professor of the Philosophy of Religion, University of Birmingham, UK)

“Is God the Best Explanation of Things?  is an exemplar of the virtues a philosophical dialogue should display.  It is about fundamental issues, is engagingly written, and offers original arguments.  Moreover, it is a genuinely open-minded series of exchanges that exhibit the philosophical progress that can be achieved when the interlocutors are eager to learn from one another and see themselves as partners in their search for the truth of the matter.” (Evan Fales, Professor of Philosophy (emeritus), University of Iowa, USA)

“This book brings together the formidable talents of two philosophers to bear on one of the most intractable problems in philosophy: the question of whether or not we have good reason to accept the existence of God. The prose is clear and accessible, and the arguments are well-developed and rigorous. It should be of interest and value to a wide range of readers and would make an excellent text for courses in the philosophy of religion, in particular.” (Andrei Buckareff, Associate Professor of Philosophy; Co-Director of the Cognitive Science Program, Marist College, USA)

Some of my points rely on my previous work in modal epistemology. Those interested in seeing further development and defense of that sort of view might be interested in reading the contributions of myself and others in a book I co-edited with Bob Fischer: Modal Epistemology After Rationalism (Springer, 2017). 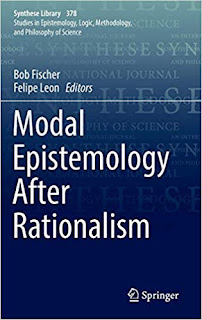 Hi EA, I was wondering what your stance is on the God question? Are you agnostic, atheist...?

I'm an agnostic most days of the week.